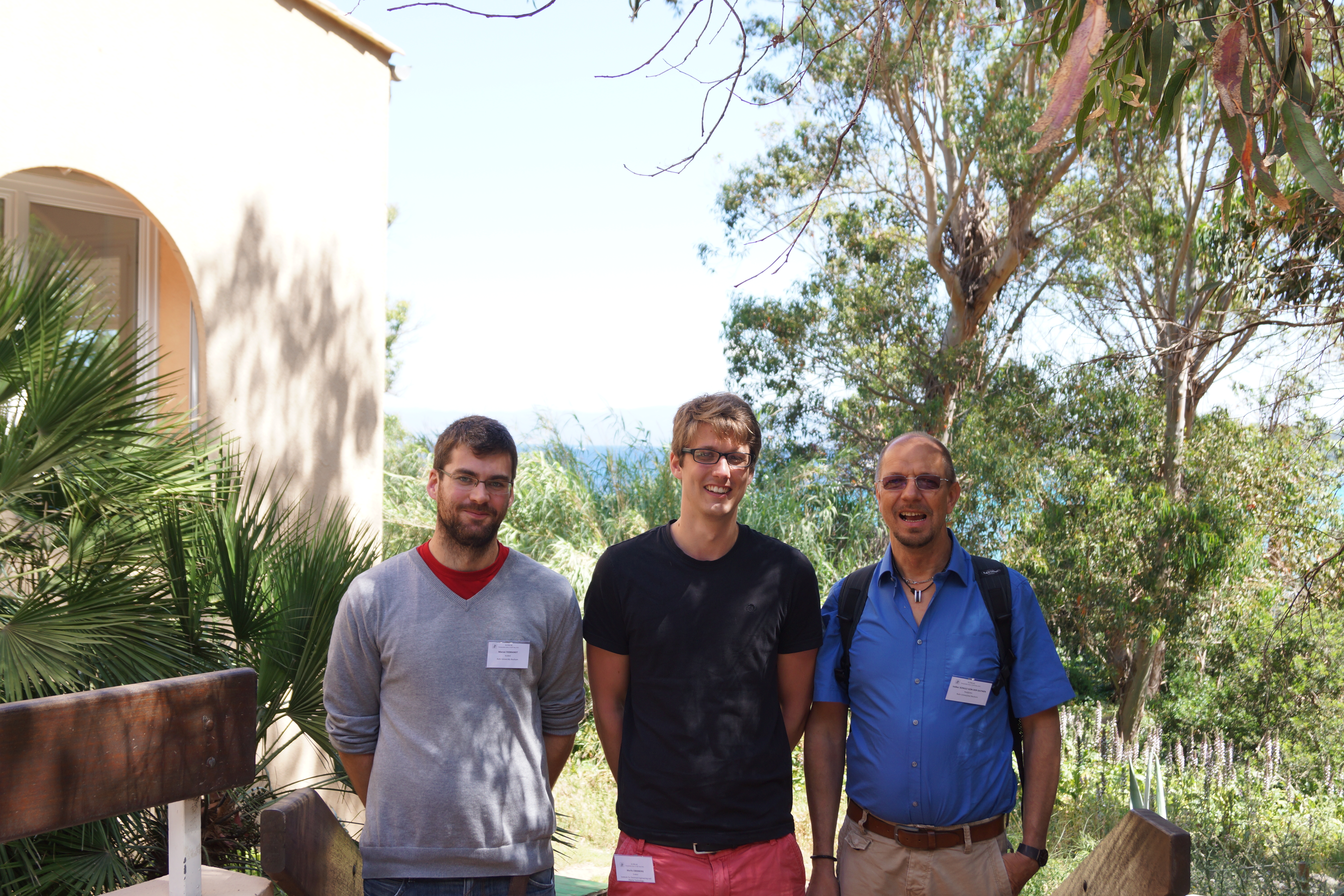 th biennial Frontiers in Low Temperature Plasma Diagnostics (FLTPD) workshop was being organised by the PIIM laboratory (Aix-Marseille University and the CNRS). It was held on the beautiful Mediterranean island of Porquerolles, approximately 15 min by boat from the mainland. It took place from Sunday 24th to Thursday 28th May, 2015 at the IGESA conference centre.
Marcel Fiebrandt and Moritz Oberberg (both AEPT), Dr. Volker Schulz-von der Gathen (EP2) as well as Prof. Dr. Uwe Czarnetzki, Dr. Emile Carbone, Dr. Tsanko Tsankov, and Xi-Ming Zhu (all EP5) participated.

h International Workshop on Microplasmas (IWM 2015) was held from May 11-15, 2015 at Seton Hall University, Seton Hall Law School campus, located in Newark, New Jersey. The IWM is hosted by the Department of Physics of the College of Arts & Sciences and the Gibbons Institute, Science & Technology Law of Seton Hall University. The German-French collaboration between GREMI (Orléans) and RUB (Bochum) continues and was being strengthened overseas as well as you can see on the photo: PhD students Judith Golda from RUB (right) together with Valentin Felix from GREMI (left).
Prof. Dr. Remi Dussart (GREMI) gave an invited talk about the common resarch topic "Performances
and instabilities of silicon based microdischarges". 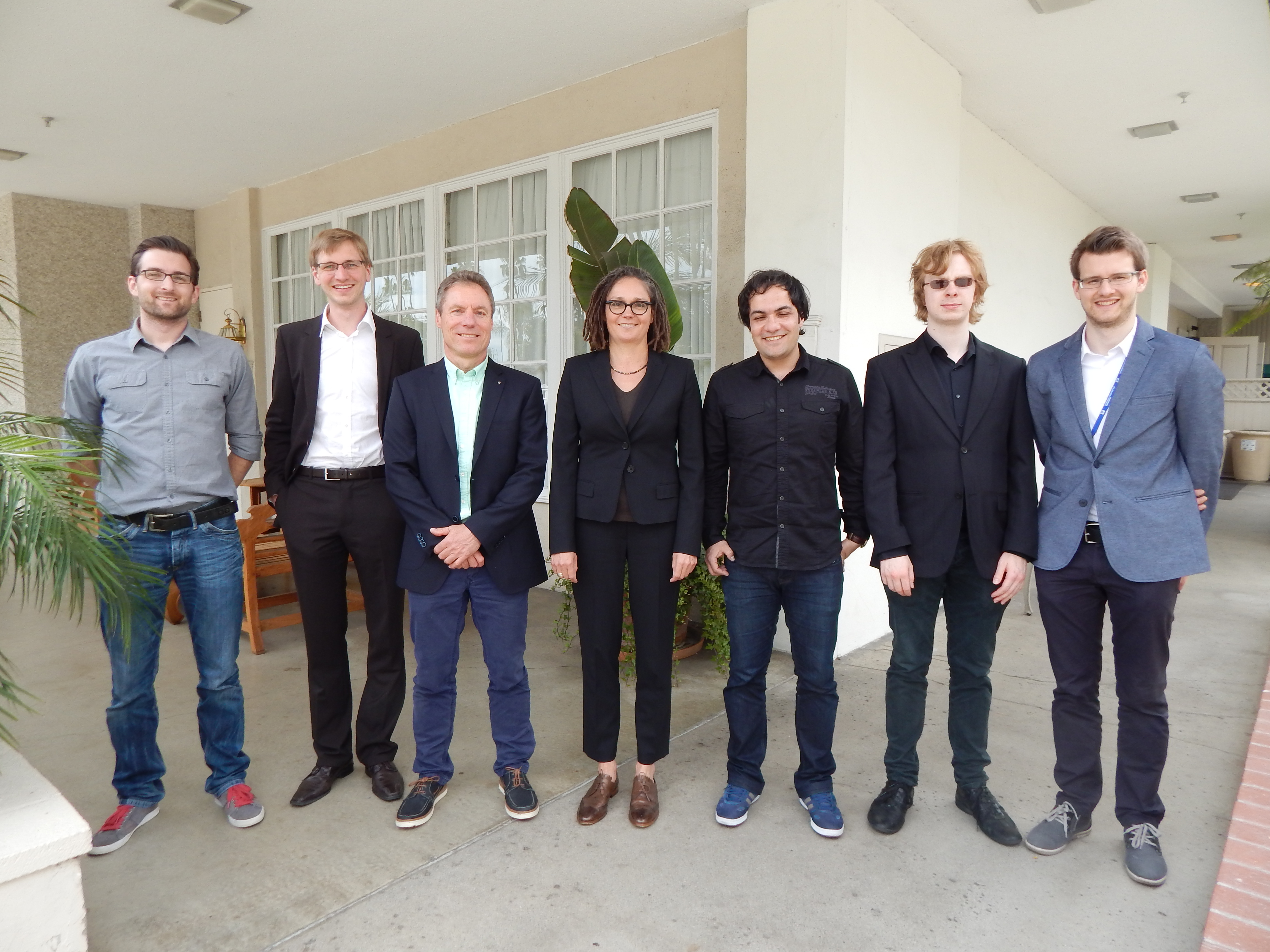 International Conference on Metallurgical Coatings and Thin Films (ICMCTF) is internationally recognized as the premier international conference focused on thin-film deposition, characterization, and advanced surface engineering. It brings together scientists, engineers, and technologists from academia, government laboratories, and industry, thereby merging cutting-edge research with real-world applications. The conference consistently draws more than 700 attendees each year within 37 oral technical sessions and a well-attended poster session.
It took part in San Diego from April 20th-24th, 2015. Postdoc Dr. Ante Hecimovic (Experimental Physics II) gave a presentation entitled "Plasma oscillations and ion transport in DC and HiPIMS magnetron discharges". He was also a session chair on a topical symposia "Plasma diagnostic and modelling". At the end, he has organised a round table disccusion on "Plasma diagnostic and modelling techniques for improved understanding of deposition process".
Prof. Dr. Peter Awakowicz and his PhD student Stefan Ries participated at ICMCTF as well. 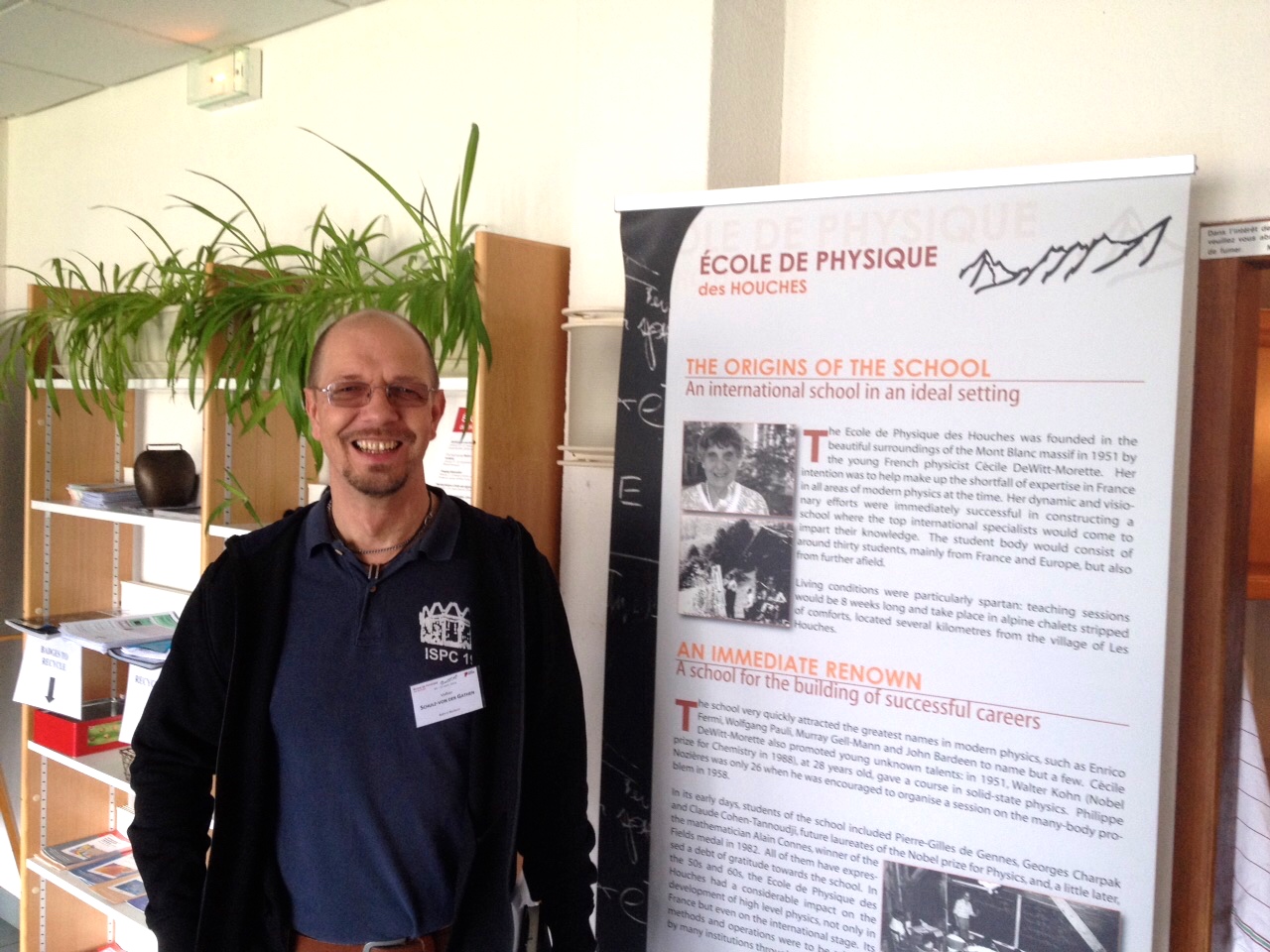 Gathen (EP2, RUB) gives a talk about "Dynamics of the discharge evolution of micro discharge arrays" at the École de Physique des Houches in France (from April 12, 2015 to April 17, 2015).
This conference is the fifth of a cycle of conferences dedicated to the fundamental issues in the scientific disciplines relevant to aeronautics and space development. The previous editions of this workshop were held in Villa Monastero, Italy (2007), Les Houches (2009 & 2011) and Aussois (2013). The program will feature twenty invited lectures. Presentations will again address fundamental issues, experimental challenges, measurement methods and advanced numerical simulation.
The conference is managed by a team from the Paris region, with Svetlana Starikovskaia (Chairperson, Laboratoire de Physique des Plasmas, Ecole Polytechnique), Christophe Laux (vice-Chair, Ecole Centrale de Paris), Jean-Pierre Taran (local organisation, Onera) and a Steering Committee composed of leading scientists in the field.
The program of invited lectures can be found here.

This interdisciplinary workshop will give a synoptic overview of the cosmic ray anisotropy observations by the large area telescopes as IceCube, Milagro, the Tibet airshower array among others, and those observed by spacecraft especially by the Voyager and Pamela spacecraft and the AMS instrument, as well as the theory and modeling efforts including that of the large scale heliosphere. The anisotropies in the cosmic ray flux appear from the high energy range (TeV) to low energy range (keV to MeV) that is in the propagation of galactic cosmic rays to the propagation of solar energetic particles as well as that of Jovian electrons. Recent Voyager observations also suggest that the low energy flux at the heliopause is anisotropic.
To describe the anisotropic transport a couple of models are discussed in literature. In the inner heliosphere focussed transport theories are used, which are solved numerically with the help of the equivalent stochastic differential equations. In the heliotail, for the high energy, the gyroradius is of the order of the cylindric diameter of the tail and thus one has to use the full orbit theory.
In addition all the transport models need as input the state of the local plasma enviroment. The latter is provided by large scale magnetohydrodynamic models.
Finallly, the transport of cosmic rays depends on the diffusion tensor, which is affected by the local magnetic field fluctuations and its turbulence. The acceleration or deceleration depends on the local structure of the shock fronts.
The positron anisotropy observed by Pamela spacecraft and the AMS instrument onboard of the ISS are another aspect of anomalies in the cosmic ray spectra, and some aspects shall be discussed with the emphasis on anisotropic distribution functions.
The workshop takes place at Physikzentrum Bad Honnef, 26 - 30 Januar 2015.